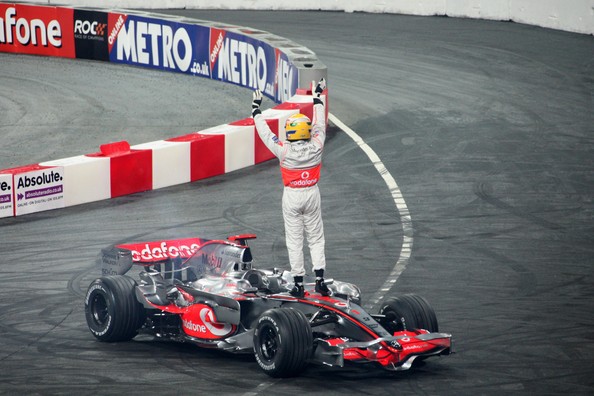 Lewis Hamilton’s racing career is really rather remarkable. No other British racing drivers’ history is quite as inspiring.

From an early age, Lewis Hamilton showed an interest in anything with an engine – cars, motorbikes, you name it, he loved it. At the age of 8, Lewis started to race go karts, spurred on by his dad Anthony Hamilton who noticed straight away that there was something different about him. Lewis had, for all intents and purposes, a killer instinct out on the track and within just a few months of karting he was beating highly experienced kart racers with ease.

By the age of 10, Lewis Hamilton had won his first British Karting Championship. It was at this age that Lewis approached McLaren team principle Ron Dennis and told him that he wanted to race for them one day.

Three years later, at the age of 13, Lewis was dominating the karting scene within his age group. He made good of his promise to Ron Dennis, because McLaren signed him up to their Young Driver Support Programme.

At this time, a man called Richard Hopkins spotted Lewis Hamilton’s skill, and looked into his past racing history. Amazed by the level at which his racing had evolved, Hopkins decided to place a bet with Ladbrokes – he bet £200 at 200/1 odds that Lewis Hamilton would win his first Formula 1 Grand Prix by the age of 23. He also bet £100 at 500/1 odds on Hamilton winning a World Championship by the time he was 25. He also wagered that both of these events would happen at odds of 1,500/1.

Little did Ladbrokes know that these bets would come back to haunt them.

During his time with McLaren in his early years, Lewis Hamilton won lots of silverware – he went on to win the British Formula Renault, Formula Three Euroseries, and GP2 championships before stepping up to F1. During his first F1 season, Lewis struggled to make his car work for him, and it was only late in the season that he started to progress.

To date, he has netted £165,000 from betting on a young man with a potentially prosperous racing career. “It’s the largest single payout we’ve ever made on a motor sport wager and is just reward for this customer, who put his faith in Hamilton so long ago.” Ladbrokes said in a statement.

The moral of the story here is that if your child is showing the signs of natural racing skills whilst karting, and is beating even his beloved dad, perhaps you should be investing a little bit more into your child’s love of racing.

Who knows, your child could be the next Lewis Hamilton!